August 30, 2012
Just in time for late night shopping, Cread is entering the books for Father's Day fray with its very own list of top gift ideas.

Tall tales at number 8: every dad secretly wants to be a bushranger, at least for a few minutes while queueing for the bus in the morning.
So what better book to read than Wild Colonial Boys by Geoff Hocking from The Five Mile Press.  Promising a bold and exciting look at Australian bushrangers, dads will not only release their inner bushranger but learn a bit of Australian history, all for under $30. Buy here.

Number 7 with a touch of heaven: It might seem a bit grim for Father's Day but actually Jim Stynes' My Journey is a celebration of making the most of every moment of life. Including Jim's touching revelations of how much he loved the simple moments playing with his kids, it will do every dad's heart good - and remind them how lucky they are. There's a fair bit of footy going on as well, so that's a bonus. My Journey by Jim Stynes from Penguin. From $29.95. Buy here.

Ernest's in at number 6: Now this one's a bit left field but every man should read at least one Ernest Hemingway book for an injection of manliness and rapid speech. A good place might be the World War I story, A Farewell to Arms. Written in 1929, Hemingway's prose reads as much more contemporary than that. Based on his own experience as an American serving with the Italian army ambulance service, his descriptions of camaraderie, battle and love will be a great tonic for jaded dads. Hemingway's description of being in a bunker hit by a trench bomb is a powerful moment made all the more compelling when we realise he went through it. And to top it off, dads will be able to boast at dinner parties that, yes, they've read Hemingway. But a character-filled second-hand copy from a book fair or preloved book store and you may pay $5. Or there's a range of new versions with hardcovers from about $30. Buy here.

Fast ride for number 5: It's not every day that a novel successfully incorporates Inca gold, supernatural horror, time-travel and spiritual overtones, but Australian Christoper Ride has done just that in the somewhat cliche-sounding Inca Curse. But Ride is too good a writer to be cliched and so dads can expect to escape on a "breathless action adventure - with time-travel twist".  The fate of the world is stake and of course there is only one man who can save it. And that, of course,  is dad... or thereabouts. Inca Curse, by former Canberran Christopher Ride, published this month by Random House. Buy here. 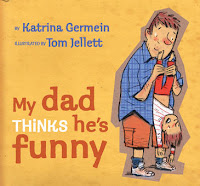 Fun galore at number 4: Most dads have a nagging feeling they should be doing more with their kids, like reading to them and riding bikes and skipping stones. So here's a book that helps dads with some of that while also equipping them with a whole bunch of hilariously bad dad jokes. My Dad Thinks He's Funny was a big hit for Fathers Day a few years ago but by now a whole bunch of new dads are resurrecting old jokes, so it might a be good time for the kids to rock up Sunday morning with My Dad Thinks He's Funny, written by Katrina Germein and illustrated by Tom Jellett. And another reason for recommending this book - the steady stream of great dad jokes on publisher Walker Books Twitter feed today! Buy here.

Getting free at number 3: The approach to Father's Day is a busy time for Australian author and speaker Steve Biddulph as all many of family groups and organisations book him in to speak about raising kids, manhood and more. recently he's been talking about the book he's working on, Raising Girls, which is due for release next year. But in the meantime, 2010's The New Manhood may well be just the thing to give dad a few more clues about what's going on. Steve's mission is to change the world one man at a time and through his stories, facts and insightful wisdom, he might get closer to his goal this Father's Day. The New Manhood by Steve Biddulph from Finch Publishing. Buy here.

Sweet number tooth: Ian McEwan's last book, Solar, featured a kind of anit-dad who was about a miserable creature as you could get. Created by the master writer to prove that even a despicable character can be in the right about somethings... Mmmm. How to win friends, not. Anyway, McEwan's new release Sweet Tooth is high up the list for two reasons. The first is that he is the kind of writer who presents his manuscript so beautifully finished that his publisher probably just scans it quickly before sending to the printer. So a good read is pretty much assured (and as Cread is yet to review it, a reliable starter is needed). Secondly, the title is entirely appropriate for Father's Day as most dads will be expecting lots of sweet things. With Darryl Lea sadly in trouble, I'm presuming Dad's Bags will be hard to find and so a book will fill the gap nicely (and with less calories). Sweet Tooth by Ian McEwan from Random House. Buy here.

Only one at number one: This might seem an odd choice at the top of the list but dads are often odd and this might actually help. Many men have trouble with the good old book - The Bible that is - and yet may be showing signs of needing to check it out. How do you tell? If he looks at you with faraway eyes and whispers, 'What's to become of you?'. If he's started putting on good clothes and disappearing on Sunday morning. Or, even more disturbingly, if you have noticed the deepest thing he does in life is scratch his backside, then perhaps a copy of the Bible might be in order. It's a good read really, blood, guts and intrigue with a few wise word as well. Now there are as many versions of the Bible as you can poke a barbecued sausage at, but a new version might be in order for dads less inclined to reading. It's called The Voice and is written like a movie so dads may well think they are reading The Ten Commandments starring Charlton Heston. The Voice written by, well, you know, and this version published by Thomas Nelson. Buy here.

Oh, and the Booktopia links are for your convenience but unless you order very early today (Thursday) they won't arrive in time. So unless you are happy with late Father's Day gifts, visit your favourite local book store. Happy Father's Day. PS Apparently you can still get Dad's Bags too!