"As long as there are history books, Neil Armstrong will be included in them, remembered for taking humankind's first small step on a world beyond our own." NASA chief Charles Bolden on the death of Neil Armstrong. 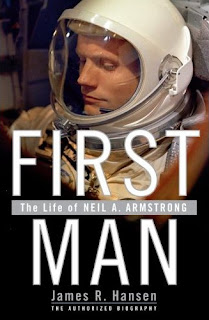 Neil Armstrong has taken another giant leap into a world beyond this, but we'll have to wait for our turn to see what he discovers.

Not so with his other small step/giant leap - his Apollo 11 moon landing on July 20, 1969 - which was broadcast live around the world and has been chronicle in hundreds of books ever since.

Like many Australian families, my parents owned an Apollo 11 photo book which I recall reading again and again in the early 70s. It was a large format photo book, with brief accounts of each phase of the Apollo mission including the moon landing. My next mission will be to see if we still own the book!

In the meantime, the somewhat reclusive Armstrong authorised only one biography, First Man: The Life of Neil A Armstrong, written by James R Hansen, published by Simon & Schuster on October 18, 2005. The hardcover version runs an impressive 784 pages.

Including at times challenging technical details, it is credited with getting past some of the protectiveness of Armstrong, at least in terms of his feelings and thoughts regarding his space travel.

"For the first time, the cool, precise, and celebrity-averse Neil Armstrong has authorised a biography. Its readers cannot expect any more access to his emotional interior than the first man to walk on the moon has ever allowed, but they will learn about everything he achieved in aerospace engineering. Deflecting aerospace historian Hansen's inquiries about personal crises, such as the death of an infant daughter or his divorce, Armstrong proves disarmingly more voluble about his involvement with airplanes and spacecraft," said reviewer Gilbert Taylor at the books' release.

While I pester my parents about the location of our little piece of Apollo 11 history, click below to purchase First Man: The Life of Neil A Armstrong from Amazon or Booktopia.

First Man: The Life of Neil A. Armstrong