Big fiction edition out now for The Big Issue 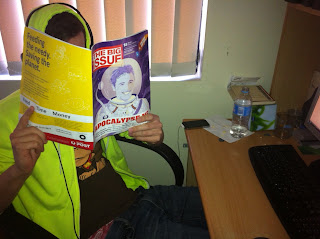 The Big Issue is a five dollar magazine sold by vendors who retain $2.50 of that sale price for themselves. These vendors are people like Lea, a former drug addict, who became homeless and lost her kids after separating with her husband. Lea's story is told in the current edition of The Big Issue, where she expresses her thanks to the publication for giving her the opportunity to make some money, when what she had become accustomed to was “no.”

The “fiction edition” of The Big Issue is in circulation until September 10. It features 12 short works of fiction, and each of these stories has been matched with artworks by modern artists. When flicking through the magazine, the positioning of these artworks seemed random, but once I'd read the accompanying stories my mind made the most of the fiction's framing, leaping one way or another to make sense of why each artwork belonged where it was. I think that's the way it's supposed to be with art, right?

With the contributions of 12 writers and 12 artists, The Big Issue has pieced together a great fiction edition. The first story is Apocalypse Me, commissioned from actor James Franco specifically for The Big Issue. he writes about the fictional portrayal of himself  in his upcoming film The End of the World. The other 11 stories are from respectably accomplished writers from around Australia.

Regarding The Ibis by David Cohen is one contribution - and it is funny. Our unnamed narrator details - from his perspective - site manager Henrik's battle with a huge flock of ibis that delay construction from beginning. The opening sentence sets the tone “Clearly, the question facing us is: what are we going to do about the ibis?”

Throughout the story, the writing continues with deadpan, unbiased civility. Our narrator recognises that the general consensus is that ibis are disgusting, but he does not hate the ibis, he understands them, pities them.

As for Henrik, he suffers frustration at the hands of the ibis, next hatred, then fascination and then something like reverence. This reverence spawns from a pro-ibis protester's lecture on the ibis' significance in ancient Egyptian mythology.

Henrik hilariously allows the folklore to inform his opinion of the birds and this seems to add a tortured aspect to his outlook in removing them. He gets it done though, in a somewhat crazed manner, detailed in an almost journalistic manner by our narrator.

It's a good story, funny and interesting. I am pleased that my perspective of the ibis has evolved to something beyond distaste, and that when next I see one somewhere close to Sydney's inner city - having an entitled scavenge - it will remind me of Henrik and his glorious victory over the flock in Regarding the Ibis.

Hopefully you already have a favourite street vendor for your The Big Issue purchases (hello to the sellers around town hall and in the Central railway tunnel). But if not, find one here.
Fiction Short Stories The Big Issue Writing