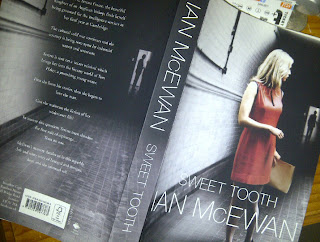 Sweet Tooth by Ian McEwan has the kind of ending that immediately sends you to the front of the book to re-examine the voice, the perspective and decide who is actually telling the story.

It feels at times more like a book of short stories as McEwan delves into his literary origins and even attributes one of his own stories to a novelist in his book.

At one stage, Serena is reading a short story written by her lover which is about a novel written by an ape and... well, it's like standing in front of a television with a camera attached, creating video feedback that disappears into nothingness.

It also feels like a memoir, especially after McEwan has revealed how closely biographical some of the material is, all except for the part about a spy. But then who knows?

His re-creation of 70s Britain is almost as dystopian as the dystopia written by his character Tom Haley in Sweet Tooth, and may be a surprise for those of us who grew up through those times in Australia and did not experience just how tough things were in the UKwith three day weeks, strikes, oil embargoes and IRA terrorism.

Of course McEwan is the master of condensed characterisation and within a few pages you have travelled seamlessly through a lifetime without feeling it is shallow or rushed.

There's a kind of broad suspense right from the opening pages - we know that somehow Serena will find herself embroiled in things momentous but it is not particularly obvious which direction this will take. Even when she is recruited for M15 we are sure that she will one day do more than shuffle paper, despite the misogyny of her employers.

It is frustrating at times, as the story unfolds, when Serena has conversations, particularly with colleague and friend Shirely, who obviously knows more of what is happening to Serena but McEwan has her fail to ask the obvious question. But we are quickly ushered past these moments and perhaps it is lifelike that we often fail to address those things right before our eyes.

This is a book you should read to be educated in the art of fiction but you may find like me that, while I grew to know the characters a great deal, I liked none of them, except perhaps for Shirley.

Beautifully created on the page, diverse, and believable, but all soulless creatures, victims of their anatomy, their status, their upbringing. (Oh, and given all the fuss about 50 Shades of Grey we should remember that Sweet Tooth like many other mainstream novels, often written by men, contains various descriptions of sex. It seems to be the thing to do nowadays but rarely is mentioned in polite circles...)

There is a theological highpoint too, perhaps surprisingly, but in keeping with the bleakness this amazing sermon (in a short story) preached by a twin on behalf of his sick Bishop twin, leads inevitably to seduction, manipulation and mediocrity.

"...we see how radical the new religion was in putting love at its centre. Uniquely in human history, a quite different principle of social organisation was proposed. In fact, a new civilisation takes root. However short it may fall of these ideals, a fresh direction is set. Jesus's idea is irresistible and irreversible. Even unbelievers must live within it. For love doesn't stand alone..." For a moment I wondered if I was reading John Dickson, or perhaps McEwan has...

It's a pity that Serena's Bishop father (a different Bishop to the short story) and just about everyone else in the book weren't privy to this message.

Or maybe it is just me, perhaps spoiled by family and friends who "live within it".