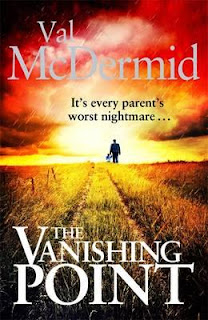 The Vanishing Point by Val McDermid is described as her “most accomplished standalone novel to date” and for me it is the first McDermid novel I’ve reviewed.

There are some fine moments in this suspense novel and it is original in its array of well-developed characters which include a reality television star, ghost writer, FBI agent, Scotland Yard officer and Romanian nanny, to name a few.

And it only took a few pages in the first chapter for the action and suspense to begin. Stephanie is asked to go to a special area of airport security because the metal rods and bolts in her leg have set off the metal detector.

Jimmy, who Stephanie is travelling with, presumably her son, waits nearby while she goes through the additional clearance process. While she watches, a man comes alongside the boy, speaks to him and they walk away together. She screams and attempts to chase them but the overzealous airport security officers think she’s a terrorist and eventually taser her while the man and boy disappear into the crowd.

Having started at this pace, it is a bit of a stretch to discover that the entire, complex back-story of Stephanie and Jimmy is going to be told through the interview that occurs with an FBI agent as they investigate the abduction of the boy.

Obviously authors needs some device to fill in the gaps but it strained my suspension of disbelief that a distressed Stephanie would spend hours recounting the minutia of her life during police interviews immediately after her “son” has been placed in mortal danger.

Consciously tucking that concern away… the story develops around a very interesting phenomenon of popular culture - the born-on-the-wrong-side-of-the-tracks young woman who intentionally uses a reality television gig to change her life.

Scarlett follows up her reality TV fame by marrying a hip-hop artist and then, among other things, working with ghost-writer Stephanie on her life’s story. From there we mostly see things from Stephanie’s perspective, although occasionally from other characters and on one or two occasions, from two different characters within the same passage which I would think is an editor’s nightmare.

Various leads are followed up and one main suspect is being investigated but is all as it seems? There are a couple of twists towards the end of the book by which time the past has re-joined the present in one narrative.

These surprises may keep readers engaged to the end although the climax seems a little improbable to me. When it comes to crime, give me Peter Temple any day, but you could do worse.

But one final whinge. The cover shows a man walking with a boy in a grassy field with a rough car trail and light rain falling. What on earth has this to do with a boy kidnapped from an airport? Maybe there’s a mystery there that I missed. If you can work it out, let me know.

Val McDermid is bestselling crime writer who has won numerous awards including the CWA Gold Dagger for best crime novel of the year in 2011.