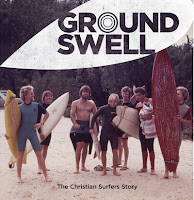 Groundswell is the new book telling the history of Christian Surfers from its launch in southern-Sydney beachside suburb of Cronulla in 1977 through to today when it is an international movement involving thousands of surfers in more than 30 nations.

And Groundswell is a fitting title for a book that has used the crowd-sourcing website Kickstart to secure $20,000 funding to ensure the books publication. More than 170 backers raised $23,564 to send the book to the printers in time for its launch at Cronulla Rydges on October 19 at 8pm. There'll be other launches around the nation with the international launch in Hawaii at the Christian Surfers international conference on November 8.

The book is written and compiled by Christian Surfers founder Brett Davis who said during the Kickstart campaign: "We’re seeking to release Groundswell as both an autobiographical account in paperback as well as a sick coffee table photo book. There are hundreds of stories and photos of ordinary people in their ordinary circumstances trusting God for the extraordinary."

Groundswell is in fact two books:
There are as many as 1000 photos in the "sick coffee table photo book" and you don't need to be a Christian to enjoy the surfer vibe from over the decades that will be visible in these pages.