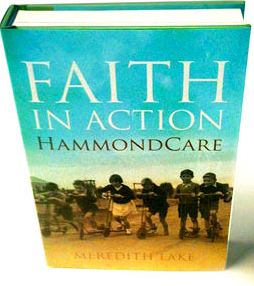 About two years ago I started working with HammondCare, having been unfamiliar with the name and the story behind it.

I was aware of a Sydney suburb called Hammondville which often appeared in traffic reports, something like - 'traffic is banked up all the way to the Hammondville toll'.

I was also very familiar with Arthur Stace, the man famous for writing his one-word sermon, Eternity, around Sydney and beyond hundreds of thousands of times from the 1930s to 1967 when he died - at Hammondville.

I had always thought his life one of Sydney's great stories and a powerful touch point of faith and culture, recognised also by those who have written about him in poems and songs, created paintings, produced documentaries and operas and even featured his word in the millennium fireworks and the Sydney Olympic opening ceremony.

What I have discovered, as is revealed in Faith in Action HammondCare, is that the story of Rev Bob Hammond and the charity he founded is just as quintessentially Sydney. 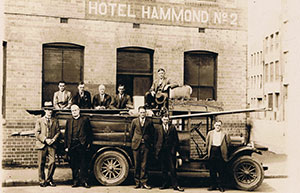 More than that, the life and ministry of Rev Hammond is one of the most inspiring you will come across, not the least for the pioneer housing scheme he established during the Great Depression, which went on to become a unique Sydney suburb.

Faith in Action intelligently opens the door to many of Rev Hammond's exploits as a social reformer, evangelist and friend of many but goes far beyond that.

It traces the fate of the charity he founded  - to house destitute inner city families - through to its presence in Australian society today as one of our nation's leading charities and health and aged care providers.

I found the challenge of transition that the charity experienced after the Great Depression receded, was instructive of the struggle many organisations go through to keep adapting and growing in the midst of leadership and social change.

With the obvious need of the Depression and even the war behind it, and with Rev Hammond with his Maker, the new leader Rev Bernard Judd had his work cut out to help plot a course to continue the vision of helping needy people in any way possible. No less his son Stephen when he took the reins in the 90s.

Author Meredith Lake pulls no punches in telling the story of each of these leaders, their successes and challenges as well as the movement around them of government policy, public opinion and economic vitality.

There are common themes through the whole 80 year history of HammondCare - staunch independence from denomination and government, risk taking innovation for those in need, unflinching commitment to practical Christianity and the harsh realities of organisational renewal.

An amazing array of historic photos and colour plates tell the story alongside Lake's easy prose in which she shows her skills as a story-teller and an historian. 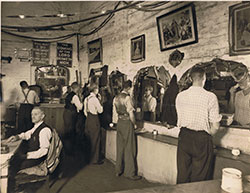 Asked if she felt the book is a successful history, she said that would be the decision of the reader, but that she had done all she could to make it so, including spending a day a week for a year in the dark archives of HammondCare at Hammondville.

If you want to understand our nation just a little bit better then you will read Faith in Action, whether you are of faith or not, because it contains some truly great accounts of what it means to be Australian.