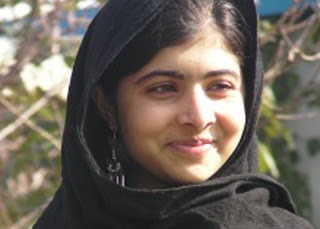 'I hope this book will reach people around the world, so they realise how difficult it is for some children to get access to education. I want to tell my story, but it will also be the story of 61m children who can't get education. I want it to be part of the campaign to give every boy and girl the right to go to school. It is their basic right.'

The next episode in the amazing life of Malala Yousafzai is about to occur with the 15-year-old Pakistani girl reportedly signing a £2mbook deal with UK publisher Weidenfeld & Nicolson, part of Hatchette UK.

And this instantly recognisable event from her life is just one reason why the new book, to be known as I am Malala is destined to be a best-seller:


'In October last year, gunmen boarded a school bus and asked: "Which one of you is Malala? Speak up, otherwise I will shoot you all". When she was identified, a gunman shot her in the head and the bullet passed through her head, neck and embedded itself in her shoulder.' [From The Guardian]

Malala writes in her book about that episode:


'I come from a country that was created at midnight. When I almost died it was just after midday. It was Tuesday, October 9, 2012, not the best of days as it was the middle of school exams, though as a bookish girl I don't mind them as much as my friends do. We'd finished for the day and I was squashed between my friends and teachers on the benches of the open-back truck we use as a school bus. There were no windows, just thick plastic sheeting that flapped at the sides and was too yellowed and dusty to see out of, and a postage stamp.'

After emergency and restorative surgery in the UK, Malala is now back at school and continuing her remarkable advocacy for children and education which began with her BBC Urdu service blog, which earned her the ire of the Taliban. She has also earned accolades around the world and the UN will celebrate Malala Day on November 10.