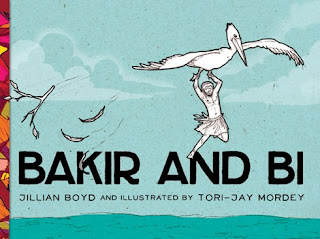 A mother of six children who has loved writing since she was 15 and an illustrator who worked on children's book Bakir and Bi while completing her final year of high school are just the start of what make this book fascinating.

Bakir and Bi, published by Magabala Books based in Broome, is connected to a Torres Strait Islander creation story.

Having written 'the odd poem or two, left unfinished stories and manuscripts lying around the house, posted up inspirational quotes in her home and written songs for the Church she attended regularly' Jillian Boyd, 41, got the idea for the book while attending a State Library of Queensland (SLQ) writing workshop.

While there, she saw a drawing 'by the late Uncle Ephraim Bani from a story about Amipuru - a picture of a giant pelican carrying a man across the ocean. She recognised the picture from her childhood, bringing back fond memories of school days on the island. Inspired by this picture, and unfamiliar with the original story, Jillian wrote Bakir and Bi’.

She asked her sister to illustrate the book but she in turn asked her daughter, Tori-Jay Morday, 18, because she knew of her ambition to become an illustrator.

Both women have a passion for their people and culture and the book was entered in the SLQ's black and write contest and duly won.

Dr Anita Heiss, Aboriginal writer, blogger and Writer in Residence at Tara School for Girls, says of the book, 'The work fills a huge gap in the stories of the Torres Strait, and it is a first-class production.'

Read more about the black and write prize recipients and how Tori-Jay came to illustrate the book.

Click on the Booktopia banner below to purchase Bakir and Bi.