Book news: early release of The Undesirables: Inside Nauru by Mark Isaacs 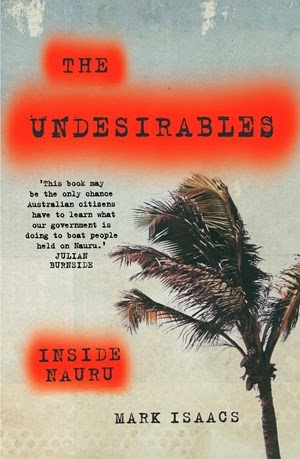 Australian publisher Hardie Grant has moved forward the release of The Undesirables which is a whistle-blower's account from inside the asylum-seeker camp on Nauru.

Available from March 17, 2014 the rushed release is in response to the recent violence and death of one asylum-seeker at Manus Island.

Author Mark Isaacs was just 24 when, as the Sydney Morning Herald reports, he was hired as a support worker for Naura detention centre on the strength of a single phone interview. He joined other untrained Salvation Army contractors who were quickly assembled to serve at the camp, re-opened in a desperate attempt by then Prime Minister Julia Gillard to solve her asylum seeker political problem.

According to Hardie Grant's publicity of the book:


'His [Mark Isaacs'] unique voice and unbiased view allow readers to draw their own conclusions and holds up a mirror to the Australian government, and it's [sic] policies. This book is not a justification of the men's actions, it is an insight into life in the Nauru Regional Processing Centre in the lead up to that Friday evening [July 19, 2013 riot]. It is the story behind a riot. Australia's hard-line stance on asylum seekers is increasingly polarising the community and regardless of political stance, this haunting and eye-opening book is one every Australian should read in an era of increased secrecy around Australia's treatment of asylum seekers.'

While the Salvation Army may have cause for some embarrassment from the revelations, Isaacs does not appear to be going out of his way to be critical of them. More so he is seeking to open eyes to a government process that plays with people's lives with devastating consequences.

An extract of the book will appear in the Sun Herald tomorrow (March 16) and today's report is available here.

Update: The book is now available - click on the cover above to purchase from Booktopia. Visit Mark Isaacs website.