March 13, 2014
Probably the most interesting thing about The Tournament is how I received my copy.
Which is not to say Reilly's departure into historical fiction is bland or boring, but that fact is often stranger then fiction, even when the fiction is by one of Australia's leading action authors. 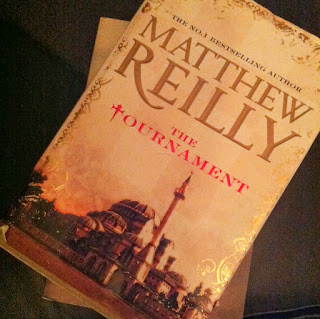 Returning from my favourite Sydney CBD coffee shop, Vella Nero on Clarence St, I saw relaxing in the sunshine on Druitt St, a young man, with all the indications of being homeless, and with this copy of The Tournament sitting next to him.

He was hoping people would drop a few coins in a hat, as I recall, and as I did I asked what he thought of the book.

'It's a great read,' he said. I got it last night and have been reading it ever since. Just finished it.'

'That's good to know,' I replied and before I could move one, the young man continued our conversation.

I hesitated for a moment and will admit to wondering just where the book had been in the past 24 hours. But I also saw our chance to be equals in the giving and receiving of gifts, except that I would have been the receiver of the greater gift. So I took it and gave him a smile.

'I really shouldn't, you only just got it.'

'That's okay, you can give it back to me next time you see me.'

'Good idea. Thanks, I'll enjoy this.'

And off I went wondering if in fact I would ever see Nugget again. I haven't yet...

I did enjoy the book, and felt Reilly adapted well to historical fiction, with his economical but deft characterisation providing just enough dimension to fill out the more spacious atmosphere of the past.

The main character Elizabeth 1, confesses to an unspoken adventure undertaken when she was young with her tutor and esteemed scholar, Roger Ascham, good friend and willowy blonde Elsie, and England's best chess player, Mr Giles.

Suleiman the Magnificent, Sultan of the Ottoman Empire has invited delegations from across Europe and beyond to a chess tournament and Ascham sees it as a chance for the young Royal to learn as well as escape the ravages of the plague.

The perfect setting for Reilly to create the game-like environment of The Tournament where endless intrigue, violence and sex can take place.

Hold on, back up, sex? In another departure Reilly has include the 'pert of bosom' Elsie mainly as a vehicle for his description of wanton sexual activity. The girl certainly has an appetite, and not just behind closed doors.

While she pursues her ambition of bedding the Sultan's son (perhaps 'bedding' is superfluous) Ascham and Elizabeth seek to solve the mystery, or mysteries, behind an even growing list of murders that form the backdrop to the chess competition, which itself cannot it be all it seems.

There is also moral teaching, or parable, apparent in Reilly's book, and while that has not been invisible in previous books, where justice was somehow evident in the honour and courage of various combatants, it is, like the appearance of sex, not done with great subtlety.

Will Reilly fans enjoy it? Presumably so and many will be happy enough with the detailed descriptions of various kinds of sexual activity. Others may wonder what the point is?

Still, the mystery lingers long enough to carry the day, but I'll be happy enough to return The Tournament to Nugget, if I ever lay eyes on him again, God bless him.

The Tournament by Matthew Reilly. Published by Pan McMillan Australia, 2013. Hardcover 410 pages including comments from the author.