Book review: I am Malala by Malala Yousafzai

July 11, 2014
The obvious attraction of I Am Malala is the inside story of this young women's violent struggle with the Taliban but there are even greater, quieter wonders on offer for the patient reader. 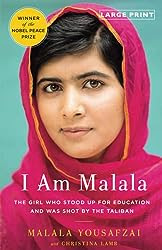 Malala Yousafzai tells her story with a refreshing lack of self-consciousness so that we are given not only a deeply personal insight into her own soul, but into the intricacies of her family and her troubled Swat homelands in Pakistan's northwestern Khyber Pakhtunkhwa province.

The entire world focused on one day of her life, Tuesday, October 9, 2012 when the high school student and campaigner for girls education, was shot by a member of the Taliban who also wounded two of her fellow students.

The entire world has again focused on Malala with the announcement she is to jointly receive the 2014 Nobel Peace Prize.*

Although the book takes its time to provide satisfying detail as to the events of the day she was shot, there is no sense of frustrating delay as the reader is first introduced to her family, her beloved Swat, the culture of her people and her own development as competitive student who quietly and respectfully questions some of the more restrictive aspects of her religion and culture.

The maturity of character development and the sustaining of themes over the breadth of what is longish book, would seem to be skills beyond anyone as young as Yousafzai. While not doubting that she is a remarkably gifted person, it would seem we can look to the measured touch of co-writer Christina Lamb for ensuring that this is not just a one-moment book.

In a day when cross cultural awareness and appreciation is vital if we are to find a peaceful way forward in the world, I Am Malala offers both hope and concern. Any non-Muslim who reads it will find a strong and loving family with some of the traits common to families of all cultures and backgrounds.

Sitting in class with her friends she could be a school student in any nation of the world. Idealising her father, in awe of her mother, loyal to her sometimes annoying younger brothers is nothing different to what might be written by a girl in Sydney or London or Los Angeles.

But there are distinctions too. Her love for her town, province, the Pashtun people, and her nation of Pakistan is more stringently and stridently held than might be the case for a young person in more secure and settled surrounds who, while loving where they live, would not have had to think about (or hold on to) their allegiances quite so much.

Her cultural, religious and national pride is held in tension with her abhorrence at some of the much too common beliefs and behaviours that, among other horrors, led to the attempt on her life.

Still I found her tolerance of violence and repression disturbing. Not that she intended this but, as we all have blindspots, this was one of Malala's. That the relentless public beating of a girl with canes might be treated with some indifference could only come from a person who has seen - and lived with endlessly - even worse acts.

It is not a tolerance of her making, and maybe with time, a truer sensitivity born of safety will be restored so that she is able to give not even grudging ground to any cause that relies on violence and oppression.

It was heartening to see how the British were able to come alongside the Pakistanis and find a way to ensure not only did Malala receive the life-saving medical treatment she needed after being shot, but that she could have a safe-haven into the future.

And it was endearing to read of the family's adjustment to life in a Western country where their concerns may not be that much different to anyone else. Her mother's shock at the short-short's of English girls in winter leaving her wondering if they had legs of marble, is something a billion mothers might have said.

So we are not all that different, and many will say, why are you making such a point of the obvious? Because I think we are largely unaware of our common humanity and I would have been less aware than I am without reading this book.

I and many others probably would never had read it and Malala may never have written it, if some thug had not tried to kill her. So it is often with tragedy, goodness finds a place to grow all the same.

We hope you enjoyed Cread's book review of I Am Malala