Book review: The Girl on the Train by Paula Hawkins

January 11, 2015
The comparisons for The Girl on the Train and Gone Girl are coming thick and fast and will do sales of the former no harm as it is published in Australia this month. 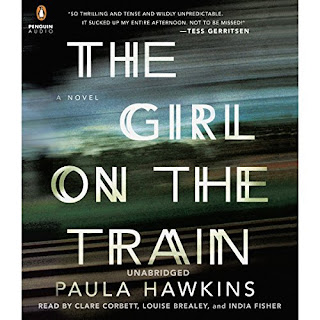 And there are plenty of similarities - the gradual denuding of all of the main characters in The Girl on the Train, so that their worst (and perhaps for some, their best) is gradually and in some cases terrifyingly revealed recalls the gradual descent into evil and despair so evident in the main relationships of Gone Girl.

The psychological double and triple plays ensure that even with the rapid fire chapters, the (slightly generous) reader will find themselves well and truly hooked. I read it in a day or two, for example.

The Girl on the Train plays on the fears and curiosity many of us would find familiar from modern life where we are thrust together randomly with people - often in close quarters - in trains, traffic, buses and housing, affording us the opportunity to be mutual voyeurs and wondering what night happen if someone took and unexpected interest in our life.

Rachel Watson is he girl on the the train and someone for whom the journey is definitely more important than the destination as she draws more from the daily train commute to and from London than she does from her depressing daily arrival.

She fantasises about a couple she often sees in a terrace along the tracks and also obssesses about the nearby terrace where her ex-husband and his new wife and daughter live.

Paula Hawkins cleverly weaves together the imperfect, often courageous and too often sordid experiences of three women - including Rachel - whose lives ebb and flow around this rail-side block, intersecting with three or four superficially attractive, deeply flawed and possibly dangerous men.

Rachel is deeply entrenched in the practice of using alcohol to manage her despair, and when we first find her this is mainly to do with the loss of her marriage and subsequent related losses. She believes the worst about herself and anyone addicted to anything will recognise the many futile promises to change she makes to herself.

Her fantasy about the life of the couple she has named Jess and Jason leads her into a surreal world of violence, deception and danger when she witnesses an act that she believes is important in a subsequent murder investigation.

This certainty is muted by her own instability, her history of alcholism and the regular experiences she has under the influence of drink of 'losing' blocks of time where her memories are fleeting at best and rarely correspond with what she believes to be reality.

And so the answer to a terrible and mysterious death and even the origins of Rachel's own misery remain just out of reach until the very last moment of the novel.

The storyline depends on this believable portrayal of a life unravelling and even disappearing into the abyss of lost memories and Paula Hawkins achieves this almost without fault.

Likewise the building of tension is powerfully achieved as we are taunted by the possibility of one character after another being not just feeble in their failings, but fatal.

The mundane domestic setting for the story makes us feel that we might just stumble upon similar mystery and intrigue by watching our neighbours through our living room window. Fortunately fiction takes the rare and brings it front and centre so we all have the opportunity to experience (safely) what it might be like to be caught unwittingly in the web of dangerously evil people.

This is a successful thriller and may yet match the status of Gone Girl as one of the most disturbing psychological autopsies of current fiction. I gave it four stars on NetGalley and Goodreads.