August 27, 2018
The Choke tells the story of a young girl raised by her war-ravaged grandfather in a beat-up house near the fictional Victorian town of Nullabri on the banks of the Murray River. 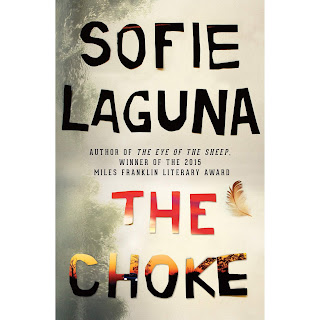 Nullabri may well be located across the water from fictional Bellington and Riversend from Chris Hammer's Scrubland as we find ourselves in another rendition of dystopian rural Australia where the river (or lack of) is a silent presence.

Author Sophie Laguna has again given her child heroine Justine and the other young characters a warmth and vulnerability so easily observable in children and it is part of the growing tension of the book as to how this will be ripped apart by the mostly dysfunctional adults in their lives. Or by the eroding process of simply growing up in poverty and ignorance.

There is something dangerously criminal about Justine's father who is mostly absent yet longed for by Justine and her step-brothers. The depiction of his return, his dismantling of his sons' fragile confidence and his brutal fathering of his daughter is part of the strength of the book and sadly all too familiar a tale in child protection, where adults often use children to pick at their own scabby wounds.

There are many unprotected children on the planet, in Australia, and any story that dispassionately draws us into their world and helps us feel their despair and dignity deserves recognition.

Laguna's The Choke is a return to the theme after her Miles Franklin Award winning The Eye of the Sheep followed the story of the Jimmy whose different approach to the world is set against the bleak trinity of domestic violence, abuse of alcohol and obesity.

In The Choke, Justine is not exceptional or different other than being an even more unprotected young female whose dyslexia is unnoticed by her chook-breeding grandfather, or anyone else, other than fellow outcast, disabled school friend Michael.

As her femaleness matures, so does the threat to her innocence and safety, and in a strange way, it is her father's misguided parenting in which he teachers her to shoot, that provides a final, somewhat unlikely escape.

I enjoyed the novel but take on board the criticisms of some reviewers that the saviours in the book are all found in one (middle class, educated) world and the satans are all unschooled, poor and working class.

The Christian reader will be moved by the plight of Justine and the general despair of those around her. But you won't find yourself or your faith visible in anyway. This is a land the God forgot apparently.

Or perhaps He is silently there in the ever-flowing, somewhat tame river, a place of refuge and retreat for Justine and the source of at least some happy and unifying memories for her and others. The Choke of the title a is reference to the narrowing of the banks of the Murray, near where Justine lives, such that the flow water is forced to find its way through constriction, not unlike Justine.

But I find it hard to imagine - based on her descriptions - that Laguna has actually swum in the Murray, or perhaps only in drought. My experience was of a deep and powerful river that awed with its might and seemed to whisper that you had better not take it for granted, while at the same time offering the delight of refreshing and reprieve (from heat and boredom and sameness). My experience of God has been likewise - not always silent, definitely not tame.

Book review: I Am Pilgrim by Terry Hayes

Receiving the kindle version of I Am Pilgrim as part of a bloggers book tour, I settled into read the novel without researching the author or any broader publicity for the book. The brief blurb I had read set it up as interesting thriller and to be honest, I wasn't even aware the author was Australian although references through the book, such as Dr Sydney, convinced me this was the case. After turning the last page (or more accurately tapping the last screen) I read the book's credits and was impressed with Terry Hayes lengthy and stellar career as a journalist and screen writer which, by then, fitted well with my admiration for his first novel. (click cover to purchase) I Am Pilgrim starts at a suitably rapid pace with a shocking crime scene, steamy sex references, fast-talking New York cops and a mysterious, intelligent, brooding figure from whose eyes the story is told. Briefly I was worried it was going to be a trashy tale of blood and guts and tits and guns but
Read more + comment »